The leaked information came from a now deleted Reddit post. Since the leak has been exposed, there has been no official confirmation about the game existence from Ubisoft. 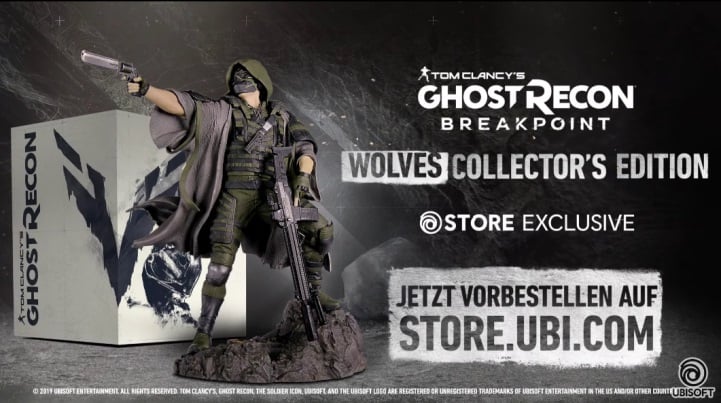 However, there have been more leaks of Ghost Recon: Breakpoint including a Collector’s Edition called Wolves Collector’s Edition. Which includes a 24cm statue of Cole, a map of the game, artwork, Year One Pass of the game which we assume will act as a season pass, and an Ultimate Pack which includes small DLCs such as missions, vehicles, cosmetics and early upgrade unlocks) and the game itself.

See Also
Fortnite leaving early access, but save the world will remain pay to play

The Wolves Collector’s Edition will allow the players to play Ghost Recon: Breakpoint three days earlier before the initial launch worldwide with a standard version.

The next instalment for Ghost Recon franchise will feature Major Cole D. Walker, who was featured in the previous Operation Oracle update for Ghost Recon Wildlands. However, for unexplained reasons, Cole has “gone rogue and seems that he has killed Holt and Midas, possibly Weaver too, and his army of mostly weaponised drones.”

The source also claims that the upcoming Tom Clancy Ghost Recon game will arrive this year on October 4th for Xbox One, PlayStation 4 and PC with no word about a Nintendo Switch release.

The leaker claims that the game will soon have a gameplay reveal which will show an alpha gameplay sequence which involves “nice jungle, with mud mechanics, then to clearing an outpost”. The game will most likely be revealed today during Ubisoft’s Ghost Recon World Premiere Livestream.

So what do you think of this leaked news? Are you excited of the idea for a sequel for Wildlands? Let us know in the comments down below!

Be sure to follow Daily Gaming Report to keep up to date with all news Ghost Recon related.

New Splinter Cell Confirmed… But It Might Not Be What You’re Expecting
August 12, 2019

The Division 2 Open Beta Revealed By The Developers
February 11, 2019