Cyberpunk 2077 recently got a 48-minute long gameplay demo, and it appears we keep getting drip fed more and more information each day. CD Projekt Red has been responding to player questions on numerous channel.

One player managed to speak to the developers via Facebook messenger, it has now been confirmed players will have the ability to purchase apartments. 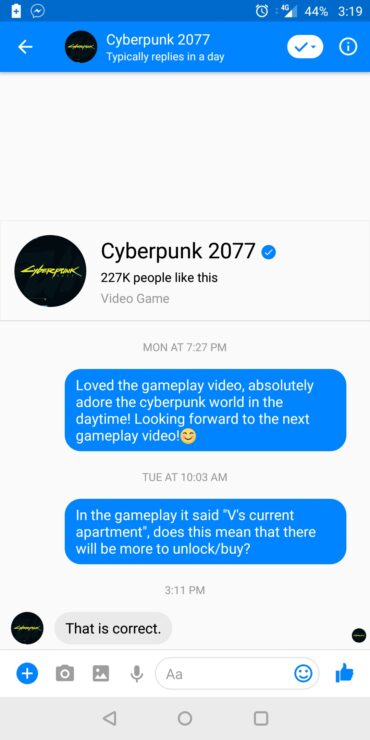 CD Projekt RED’s official forum also confirmed there would be no companion system unless missions call for it.

“Hey, like in The Witcher, if the story calls for it, you will have a companion or two for a mission, but we don’t want to do a “companion system” where you’re never alone.”

“In some quests you will be by yourself, in some you will have one person like Jackie or even a whole group, and in other quests you might be alone or with someone else depending on the choices you made. We really want to have it fit the story, so basically you’ll always have someone with you if we think it’ll be interesting.”

“Like I said, it can also be dependent on the choices you made. Sometimes if you leave someone behind and it makes sense for the story for them to stay behind, we’ll do it. And another time they might catch up. Whatever works best in a situation.”

What do you think of this? let us know in the comments below. If you enjoyed this article why not share it on social media.

The Witcher 3: Wild Hunt Complete Edition is Coming to the Switch!
August 21, 2019